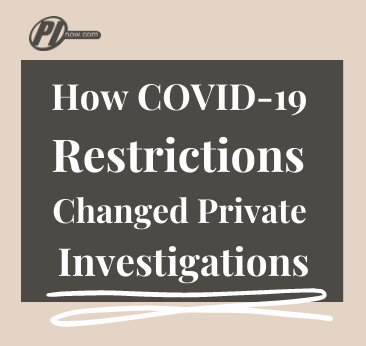 While many states have opened back up for business, others are still enforcing social distancing mandates, remote working and learning, and encouraging people to stay at home. Undoubtedly, the change in these behaviors has altered, at least in some ways, how private investigators conduct their investigations. Now, as we are now six months into living in a world with COVID-19, we are taking a moment to reflect on how restrictions and the virus have impacted the industry.

Like many industries, work abruptly slowed down for some investigators in March when COVID-19 first began proliferating in the United States. Although some cases stopped altogether, the good news is that, according to private investigators, the majority of the work appears to have recovered.

Rob Slattery, a private investigator out of Ohio, explained, “Most work stopped in March and all courts shut down. Workers’ comp cases and background checks are picking up quite a bit this past month. […] Some criminal cases are rolling again.”

One investigator from Trident Investigations explained, “For me in Salt Lake, the hardest thing was any hands-on [work]. Interviewing people (which can be done over the phone depending on the type of case) got pushed and pulling trash was temporarily discontinued. […] As far as everything else i.e. family and PI cases, all stayed pretty much the same here. Work dried up for a few weeks and then started to flow until tax season hit. Kicking back up again. For family cases (mostly custody and infidelity) things got a little busier here after the initial lockdown. Domestic violence rates went up, which is leading to more divorce and custody cases now.[…] Personal injury only slowed as most offices were closed. That’s picking up now too. Criminal all but dried up. That is picking up now too.”

Another investigator noted that his initial expectation was that work wouldn’t resume until 2021, but that quickly changed. Michael Horner of Blackstar Investigative Research Services advised that, although there are some COVID restrictions, work has picked back up: “[…] Just started a contract conducting pre-employment background checks for a company that contracts with a state agency and private prisons. I got the contract right around the time COVID hit. At first, they told me there would be no work until early 2021, but that changed quickly. Now I’m out meeting job candidates, in-person to do background interviews with them.”

Jimmie Mesis, CEO of USA Bugsweeps based out of New Jersey, explained, “We saw a drop in February and March, but have beaten last year’s numbers every month starting in April. We only conduct bug sweeps nationwide and have to visit houses and businesses. We are on several planes every week, but security and paranoia never stop clients from calling us. We just adapt, overcome, and keep moving forward.”

Other investigators have been more fortunate, with investigator Dean Beers asserting that work has been “Business as usual for us — our clients had to adjust, and some things quickly developed or became more useful. If anything, clients had to learn patience.”

Surveillance cases have posed a significant challenge for private investigators for a few reasons. First, many people are or have been sheltering in place and/or working remotely, which means they aren’t leaving the house that often. Other factors included the shutdown of businesses in which a subject would frequent, such as a bar or a gym, which were both impacted by COVID-19 restrictions in many states.

One Salt Lake City investigator told us, “Going undercover in businesses was hard as most were closed.”

Simply not having people out and about has made an impact on investigators’ ability to surveil subjects. North Carolina investigator Brett Roth with Blue Falcons Investigation noted that, “People aren’t moving around, going places and being human anymore, making catching PDA and other activities harder.” The outlook hasn’t all been bleak, though, as he advised, “Criminal activity is higher.”

Echoing a similar sentiment, Investigator Chad Regan, whose business focuses on insurance fraud and family law investigations in Southern California, noted an increase in the difficulty of surveillance jobs. He explained that while business has picked up from attorneys, “[…] the subjects under surveillance are definitely not as active as we would normally see, as most businesses are either closed or have restricted openings, which is keeping most individuals home.”

While it appears that most investigators were able to keep working, the volume of cases slowed down. Others weren’t that lucky as some types of cases stopped altogether, at least in the beginning. While some of these instances were voluntary, there are others who were harder hit where the work just didn’t come.

Focusing on other types of cases, at least temporarily, seemed to be a prudent decision for some as there was significant uncertainty regarding the virus. Alexandre Charles Matti with ACM Investigations out of South Dakota explained how his business pivoted during the initial restrictions: “We didn’t take new clients for surveillance cases, and we did focus more on online investigations and smaller tasks. But that’s all. Not much changed overall for us.”

Ryan Davis explained a similar tactic, “For a while early on, surveillance was tough as the clients didn’t want to jump at […] insurance cases.” He continued, explaining that the uncertainty regarding how the insurance cases would be handled resulted in the decision to stop surveillance cases. Other impacts were related to records. “Basically, anything we need to do records-wise we are hit or miss, as some of the courthouses aren’t allowing access.”

While it appears that surveillance took the brunt of the negative impact of COVID-19 restrictions, other types of PI work appear to have normalized somewhat, if impacted at all. With the unique challenges that the virus has brought forth in terms of accurate surveillance, there is a question of how future cases will be affected by COVID-19 complications.

For example, with doctors and scientists still learning about the virus, many people are wearing face coverings in an attempt to protect themselves and others from infection. This obscures an individual’s identity and can make it harder to make a positive confirmation.

Virginia investigator Brian Griffith explained, “The mask-wearing is really weird with getting good face ID shots on claimants/subjects in worker’s comp cases[…] It’s more of an issue when there are identity questions on our subject claimant as could cause a family member to be mistaken for the subject/claimant.” He continued and speculated on how this doubt could affect court cases, “There are plenty of situations where I can confidently say I got the right subject/ claimant, while the mask just may give enough doubt to identity as far as court proceedings. I think that’s the arguments that will arise in the next year when the court hearings start happening in relation to surveillance video obtained these past six months.”

Other concerns could include a virus resurgence that would mandate emergency stay-at-home orders, impacting what types of cases PIs would be able to take on and how the courts would deal with that situation. There unfortunately are still many unknowns.

Most everyone is ready to get back to normal — the old normal — back when masks were not mandatory and there wasn’t a novel virus changing our world. Only time will tell when that will happen moving forward, but until then, stay safe!