How an Increase in Domestic Violence Cases May Impact Private Investigators 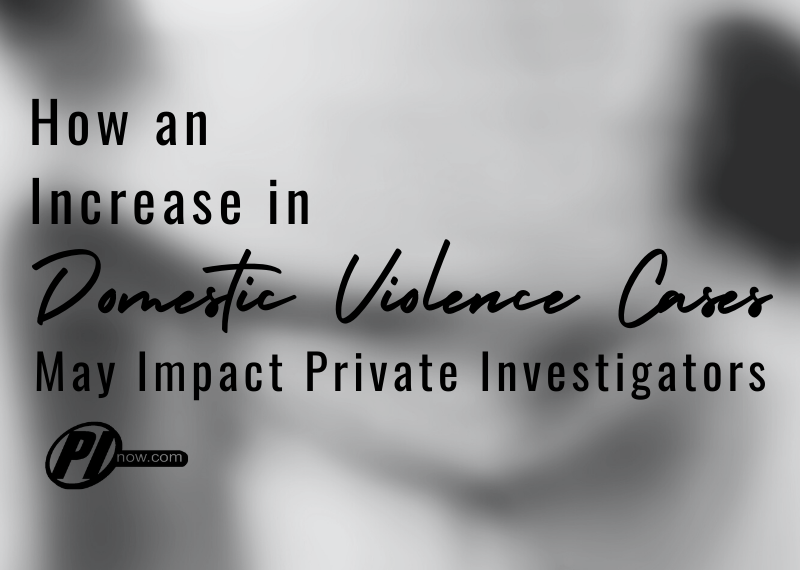 Private investigators work on domestic violence cases by gathering evidence. While the evidence gathered is most commonly for victims, in some instances, an individual accused of domestic violence may hire a PI to help bring forth evidence to clear their name.

Evidence can come in many of the same ways that PIs gather evidence in other types of cases. When hired, PIs can document injuries, record conversations, or even install hidden cameras to surveil the subjects. Conversely, private investigators can look for surveillance measures taken against a victim that could constitute stalking (such as a GPS tracker on a car). The evidence is often turned over to law enforcement or a legal team to reinforce the case.

With governors issuing shelter-in-place orders, many workplaces going remote, and individuals fearing they may contract the virus, many people have ended up spending more time at home. While spending more time together alone can cause a spike in violence made worse by the unknowns of the virus, changes in employment, loss of wages or unemployment, civil unrest and political division across the United States, and an increase of alcohol use can all escalate domestic violence. Sadly, the coronavirus pandemic has led to an increase in domestic violence cases across the country — with one study published by EClinical Medicine citing a shocking “300% increase in police reports of intimate-partner violence (IPV)[…].”

A scientific study almost isn’t necessary, as news media’s reports across the country tell the same story. The Indiana Coalition Against Domestic Violence reports that they have seen an astounding 86% increase in domestic violence-related death, and they “can clearly contribute this to COVID.” The article goes on to explain that social isolation, increased alcohol consumption and unemployment are contributing factors to the increase.

Not only is the volume of incidents rising, but in many cases, the violence is more severe according to a 2020 study published in Radiology. It cited that “Radiological studies showed more central and visceral organ injuries during the 2020 state of emergency, which are suggestive of high-risk abuse,” meaning that the injuries were more serious and less superficial than in years past.

What is also troubling is that, although the number of incidents and the severity of incidents has increased, according to the study, “An overall lower number of intimate partner violence (IPV) victims with a greater number and severity of physical abuse is suggestive of victims reaching out to healthcare services in their later stage of abuse due to fear of COVID-19.” This is echoed in other news reports. Bethesda Magazine also reported that locally, many domestic violence victims do not want to go to the hospital for fear of catching coronavirus even after violent events such as strangulation, as stated in the article by Montgomery County Trauma Services manager Nadja Cabello.

Will PIs see an increase in cases?

What is unknown is whether this uptick in domestic violence cases will result in more work for private investigators. One private investigator out of northwest Arkansas, Michael Hudson, said that although he has not seen any additional work, he is aware of an increase in cases. As to whether or not he is anticipating a rise, he said, “I am not seeing any bump but that effect may be in the future.” While it is unknown whether a trickle-down effect will occur, bringing about more work for investigators, one thing is for sure: the importance of PIs is even more significant than before.